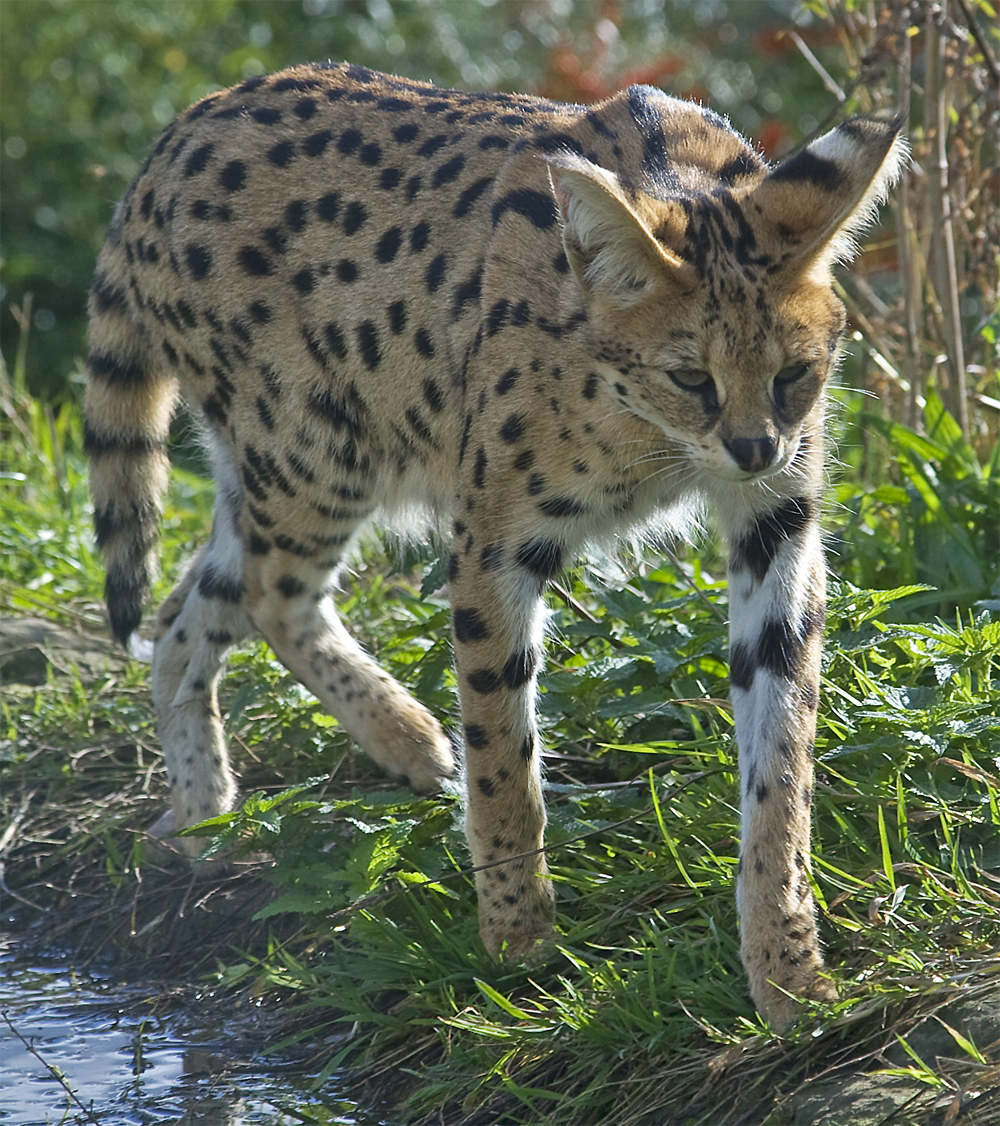 The African Serval (Leptailurus Serval) is an elegant, long limbed, medium-small wildcat species from Africa. With a rangy body type, tawny coat and vivid spotting, the Serval somewhat resembles a small Cheetah with a short tail and very large ears. Servals typically weigh from 20-45 lbs. as adults. They look larger than their actual weight, due to their very long limbs.

Most Servals live in wetland areas and grassy savannahs of sub-Saharan Africa. They are highly adaptable, and may be nocturnal and crepuscular (active at night and during dawn and evening). The Serval’s primary diet is small animals such as rodents, birds and frogs. Servals are lightening-quick hunters, very agile, and great jumpers. Servals have been observed to leap 10 feet straight up from a standing position. 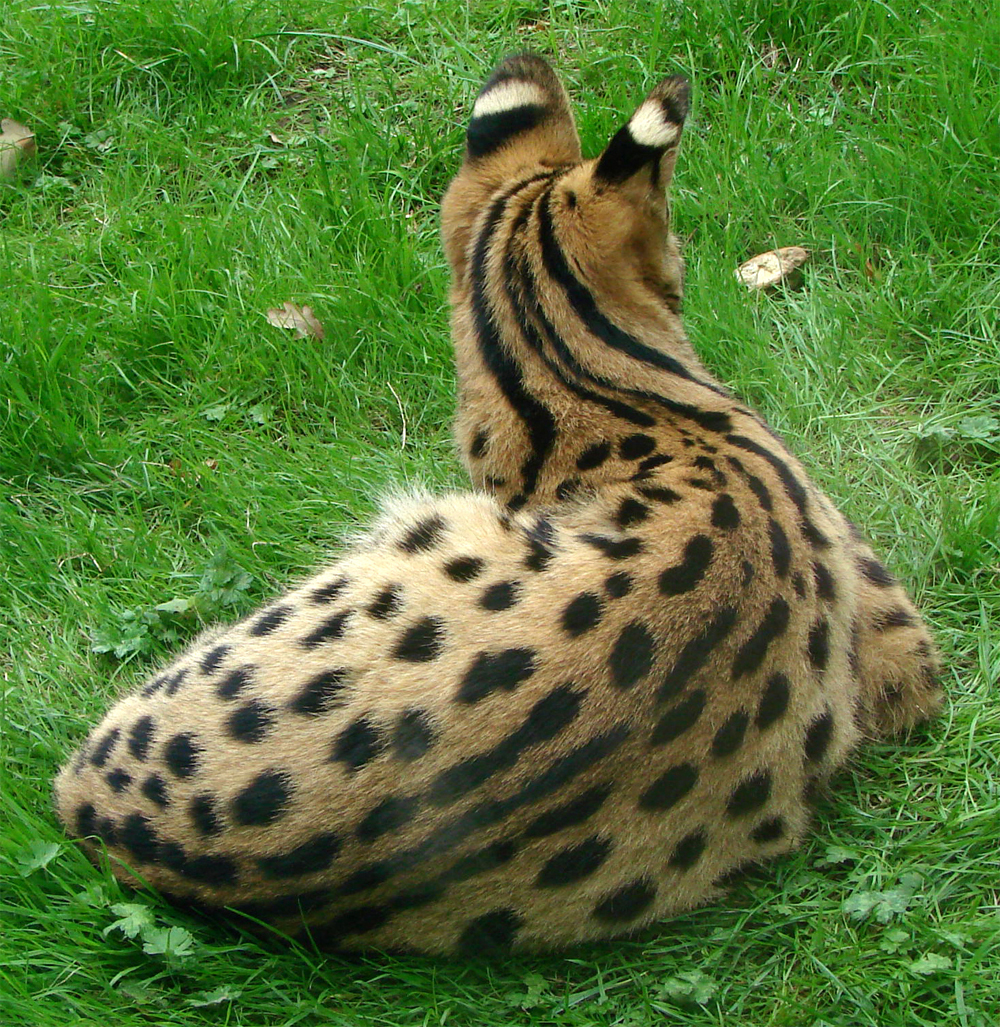 Serval, by Vassil (Own work), via Wikimedia Commons

The most common Serval coloration is a tawny golden coat with a myriad of bold black spots over most of the body, and elongated spots or stripes in the neck and shoulder area. No two Servals are exactly alike in pattern. There are several subspecies of Serval in various regions of Africa. Some have variations in color, such as speckled, finer spots (Servaline), or the black (melanistic) Servals found in some mountainous regions. There are also rare color variations such as white Servals, and Servals with white feet or markings. Serval eyes may be shades of green, yellow, gold, copper, brown, and even blue and aquamarine.

The Serval’s beauty appeals to many, and most Servals have a very affectionate disposition when cared for properly.

Among those experienced in raising them, Servals are considered to have a particularly pleasant temperament, more adaptable to living with humans than other wild cat species. Servals have been kept as pets for thousands of years, in Africa and elsewhere in the world. The ancient Egyptians depicted domesticated Servals in their art, and kept them to protect their grain from rodents.

Do I want a Serval for a pet?

This is a question that requires very careful consideration.
The needs of wild cats are not well met in most modern households. Servals are extremely active and energetic. They have an intelligence and curiosity that is not adapted to confinement in small quarters. In exploring one’s home they can (and will) jump everywhere and get into everything, day and night. And like many wild animals (and some tame ones) if not altered, most of them mark their territory by spraying (a lot), much more than domestic cats do. Some serval keepers even find themselves becoming accustomed to their pet showing affection in (to put it delicately) “showers of love”. This tendency is sometimes stopped, but may only be reduced, by neutering or spaying.

When excited, displeased, alarmed or frightened, Servals express themselves with hisses and growls considerably more than most domestic cats. They can seem quite scary to those unfamiliar with this trait, in many cases appearing much more hostile than they really are. Servals as a rule are actually rather timid in unfamiliar or hostile situations, and would rather avoid trouble. But they also are larger than domestic cats, so an aggressive or frightened Serval could do more damage. Like any animal with claws or teeth, a Serval with merely playful intentions can cause injuries, too. Like other cats, a healthy serval may stay irrepressibly playful when full grown, so it is important to teach them good manners while they are very young. 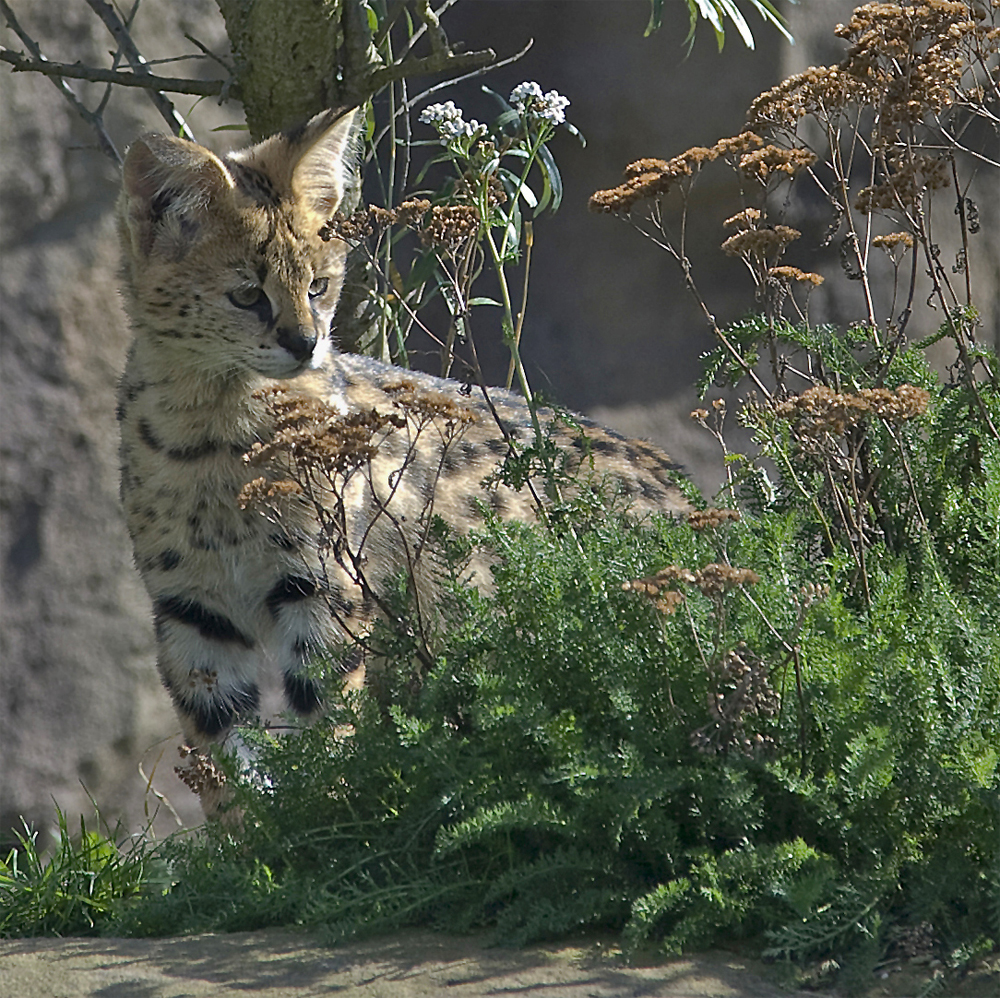 Serval, by Vassil (Own work), via Wikimedia Commons

Servals like to chew on things they find around the house, as puppies do. In the case of Servals, this can last through adulthood. They can cause a lot of damage, and put their own health at risk. A Serval owner must be mindful of this. Servals can require emergency surgery to save their lives due to items they have ingested that have formed intestinal blockages or are toxic. This is a frequent cause for emergency vet care with Servals. This kind of veterinary care can be quite expensive.

It is important to establish that you have an accessible veterinarian with the necessary knowledge to care for your Serval. Some aspects of their medical care are very different from that of domestic cats. Some veterinarians refuse to treat exotic animals, so check in advance.

Servals require special foods, replicating the complete nutrition they would have in the wild. They have not evolved the ability to subsist on processed kibble and canned diets. Making sure their nutritional needs are met takes education, attention and dedication. Many people, out of ignorance, have fed their Servals diets lacking in sufficient calcium, and the Serval’s bones have become weak and brittle, and then broken.

Servals intended as pets are usually taken from their mothers and bottle-fed, to make sure they will be well socialized with humans. The new owner usually acquires the baby Serval at a very young age, and continues to bottle feed the kitten to establish a deep bond.

Servals are much better pets if spayed or neutered. A pet Serval raised from kittenhood with a very good disposition may change upon coming into maturity if unaltered. These behavior changes are due to it’s strong drives, and this aspect of nature must be respected. Most unaltered servals (and some altered ones) will need to live in an outdoor habitat once they are a couple of years old, regardless of how much love they share with their people. Some people design beautiful outdoor environments for their serval’s enjoyment, where their humans can spend some time with them.

Servals bond very deeply with their families, and it is usually deeply traumatic for them to be separated from the people, household, and other pets they have grown to love. They can live for around 20 years, so acquiring a Serval is a serious long-term commitment.

Many people who have purchased a Serval as a pet, found that as the cat matured, they were not able to accommodate it’s needs, and the cat was innocently disrupting their life style. Most of us, regardless of how much we love animals, need to do some serious research, training and preparation before keeping such an animal.

There are legal restrictions on keeping Servals (and various other wild species) in many states and counties. In some states, keeping a Serval at all is illegal. Some state laws and/or local ordinances are variously restrictive, and some allow Servals to be kept with specific licenses, permits and strictly defined facilities. In some of those states and counties, the licenses and permits may be difficult to obtain. IT IS VERY IMPORTANT TO MAKE SURE YOU HAVE DONE ALL NECESSARY LEGAL PREPARATIONS AND HAVE LEGAL APPROVAL IN WRITING BEFORE GETTING A SERVAL. Numerous tragic consequences (such as confiscation and sometimes even euthanasia of the Serval) have occurred when this necessity was ignored. Check with your state’s Dept. of Agriculture. Also check with Fish & Wildlife to see if they have restrictions and rules on enclosures and facilities you need to provide. Check to see what local town, city or county ordinances may exist where you live.

It is very important to know the care needs of Servals before acquiring one. Here are some great sources for lots of helpful information.